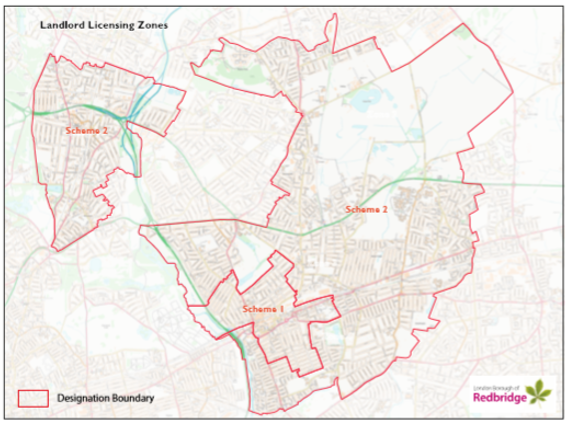 In Redbridge alone, and due to the supposed success of scheme one introduced in May 2017 (Valentines Ward and Clementswood), it has been implemented almost borough-wide and we have now started to realise just how rigorous local authorities are enforcing the scheme.

Strict penalties and deadlines are issued to landlords who have not complied with the requirement. Failure to submit an application within the time frame specified could result in formal legal proceedings issued for which the courts can impose a financial penalty up to a maximum of £30,000 per offence.
To complete the license, you are required to upload a valid gas certificate (where applicable) and a valid EPC demonstrating a performance rating of E or above. It is worthy to note that Minimum Energy Effiency Standards come into effect from the 1st April this year and therefore landlords will need to upgrade appliances/fittings to ensure compliance (only for properties falling below the E threshold).

For larger properties let to more than two unrelated households and dependent on the borough, landlords will need to apply for HMO-type licenses (this differs from planning (C4 use)). Landlords will need to adequately fire-proof their properties which would entail changing doors to half-hour fire resistant doors (FD30) with appropriate automatic door closing mechanisms and fire resistant hinges, fireproofing the underside of the staircase, mains contacted smoke alarms/heat detectors in individual rooms, and in some instances a fire alarm panel and emergency lighting.

So how will this effect rent? Application fees range depending on the occupation. The approximate application fee to license a privately rented property to a single household in Redbridge under scheme one is £600.00 and under scheme two £500.00 (although a discount is offered for early-bird applicants). A total reconfiguration of the fee structure for HMO-type dwellings could leave landlords forking out as much as £1864.00! With the phasing out of interest relief on buy-to-lets, landlords will, now more than ever, think to burden costs to tenants through rent increases to maintain the level of profitability in their investments.

Traditionally it was pretty normal for agents and landlords to witness subletting of individual rooms in a property to ‘help pay the rent.’ To put this in perspective, a traditional 1910s built three-bedroom house in Ilford in reasonable repair would rent in the open market for approximately £1550.00 privately to a single household. Mr. Joe Bloggs signs an AST agreement for 12 months for the asking rent and 7 months down the line, he is made redundant from his job and simply cannot afford to sustain the rent. He approaches two of his friends and now there are seven people living in the property as three individual households. The license restricts the maximum number of occupants to five, and now there is a problem of overcrowding with a possibility of planning enforcement as it is above the six-person threshold.

The point we are getting at is that it will be harder to sub-let without contravening licensing conditions and in turn, landlords cannot expect previously promised extortionate amounts of rent based a room let occupancy.
Local authorities have a public register of licensed properties so there is no hiding from the scheme.

• How To Manage You Budget When Buying A Home

• House Prices Remain Stable Over The Summer Despite Brexit